Agra
Please Note: Your wellbeing is our priority

Sitting at the edge of the majestic Yamuna River, Agra was once the glorious capital of the mighty Mughal Empire at the peak of its power. However, in today’s world, Agra is synonymous with one of the Seven Wonders of the World, the Taj Mahal.  It is a major tourist destination because of its many splendid Mughal-era buildings, most notably the Taj Mahal, Agra Fort and Fatehpur Sikri, all three of which are UNESCO World Heritage Sites.

Agra is included on the Golden Triangle tourist circuit, along with Delhi and Jaipur. The legacy of the Mughal Empire has left a magnificent fort and a liberal sprinkling of fascinating tombs and mausoleums; and there’s also fun to be had in the bustling bazars (marketplaces). The examples of art and culture in this historic city are not only breathtaking but are also mirrors of the artistic talents of the Indian population during the grand past.

The city has its unique style of traditional paintings, folk dances, folk music and embroideries. Agra is also a popular shopping destination where you can buy marble with inlay work, semi-precious stones, jewellery and handicrafts. The city is also very famous for its superior quality leather goods like bags, belts and jackets. 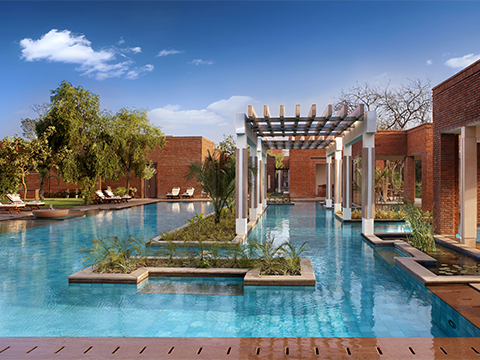 Winner of the Aga Khan Award for Architectural excellence, ITC Mughal is a fitting tribute to the great Mughal builders of the past.