Rajkot
Please note: Your wellbeing is our priority

Regarded as the center of the Saurashtra region, Rajkot is the fourth largest city of the Gujarat state and enjoys a central location in Kathiawar peninsula region, making it an important industrial center of the region. Already home to heavy and small scale industries, the city has earned a worldwide reputation for casting and forging.

Home to the ‘Father of the nation’ - Mahatma Gandhi - Rajkot has a rich heritage and collection of landmarks. Located in the heart of the city is Jubilee Garden that houses monuments from the colonial era. Besides, Rotary Dolls Museum, which has a collection of more than 1400 dolls, and Lang Library, with collections documenting the rich era of Rajkot, are notable tourist attractions. The city has a strong bend towards performing arts and folk music and thus there are several dedicated venues acting as regional centers. 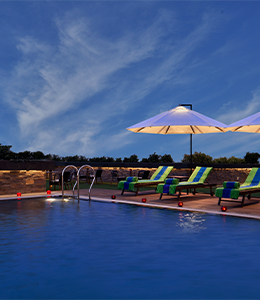