Jodhpur
Please Note: Your wellbeing is our priority

Jodhpur– or the ‘Blue City’ known for its indigo-painted houses to keep them cool in summer.

Rao Jodha, on whom the city is named, founded the city in 1459 which was previously known as Marwar. The clan traces its lineage to Lord Rama, hero of the ancient Hindu epic the Ramayana. Under the reign of Maharaja Umed Singh, Jodhpur grew into a modern city with a rich cultural heritage.

During the British Raj, the state of Jodhpur was the largest in Rajputana, by land area and its merchants, the Marwaris, flourished. After Independence, the state merged into the union of India and Jodhpur became the second biggest city of Rajasthan set at the edge of the Thar Desert. This imperial city echoes with tales of antiquity in the emptiness of the desert.

Jodhpur, one of India's most iconic travel destinations and home to an amazing array of sights, activities and events is an architecture-lover’s paradise. 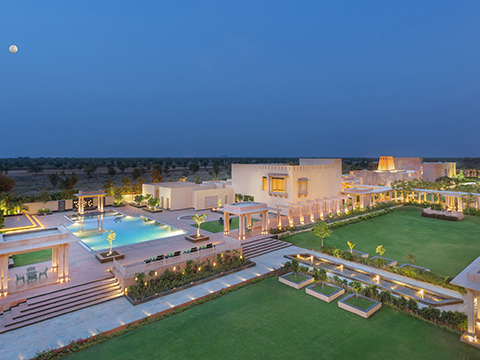 A tribute to the city of Jodhpur, Welcomhotel Jodhpur endeavors to bring about an element of grandeur through food, music, color & an ethnic mélange of unique experiences. A range of leisure activities available..