Srinagar
Please note: Your wellbeing is our priority

Srinagar is the summer capital and the largest city of the state of Jammu & Kashmir. A captivating land, it is flanked by the snow-capped Pir Panjal Range, the largest range of mountains in the Lower Himalayas. The city itself is a mesmerising blend of history, culture and religion, resulting in a leisure destination that calls out to many tourists throughout the year.

As Srinagar gently cradles the River Jhelum on both its sides, the river meanders through the city and forms multiple lakes. The most notable of the lakes in the city is the serene Dal Lake. This calm expanse of water, known as the “Jewel in the Crown of Kashmir”, garners plenty of tourism. Dotted with vibrant houseboats along the banks, a ride in a colourful shikara is a must. Glide along the cool waters and perhaps pick up a stunning bloom or two from the many boats selling flowers. Further anointing the beauty of the land are the Mughal gardens. Built during the reign of the Mughal Emperor Jahangir, Shalimar Bagh and Nishat Bagh provide captivating views of the Dal Lake.

The city is also home to many holy places as various religions coalesce amidst the beauty of this land. One may visit the Hazratbal Shrine, Jama Masjid, Shankaracharya Temple, Hari Parbat, Gurudwara Chatti Patshahi and many more religious monuments. As one further explores the city, a visit to the local markets should surely be on one’s excursion list. Places such as Lal Chowk, Polo View Market, Badshah Chowk and Residency Road are a hotspot of amazing local finds. Meander your way through the streets and discover traditional Kashmiri handicrafts, clothing, dried fruit and even quaint wooden furniture. Visit Srinagar during the months of April to October to experience the magical and bountiful charm of the Kashmir Valley to its fullest.

Marking the initial British Raj settlement in India, Chennai is also the country’s oldest municipal corporation, based on a charter that was issued by James II in 1688.

Fleetingly occupied by the French and the Portuguese, the seaport at Chennai grew and ebbed with the changing fortunes of the British Raj showcasing a city where age old customs and modernism coexist in light of a rich legacy and ethnic past. Chennai categorized under one of the fastest cities is on its way to becoming one of the most sophisticated metropolitans. With its plethora of historical features, ancient temples, dance and art forms, Chennai is popularly known as the Gateway to South India. Ranked amongst the world’s best food cities as World's second best food city by the by National Geographic, Chennai is the only Indian city to feature in the list. 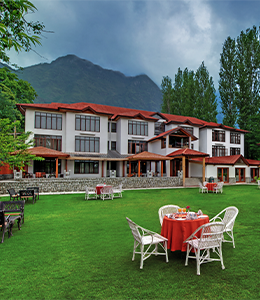